Former Age Jerusalem Bureau chief Ed O'Loughlin would be turning in his grave if he could read this report from his successor Jason Koutsoukis - Hamas, Fatah accused of methodic torture

Koutsoukis tells us that both the ruling parties of the West Bank and the Gaza Strip stand accused of "serious human rights abuses including torture."

The media remains shy about the horrific human rights abuses of the Palestinian terrorist groups, backed by their governing bodies, and deliberatley aimed at Jews. These abuses have taken place for decades, yet neither the physical violence or the threats and intimidation and even teaching hatred of Jews were subjects considered suitable of their proper coverage.

Perhaps the times really are changing.
Posted by Wilbur Post at 8:03 am 3 comments:

I can't believe that the Age has published this - Hamas arrests rivals after deadly bomb attacks.

"THE Palestinian Islamist movement Hamas is moving to suppress an outbreak of violence in the Gaza Strip that began at the start of the weekend and left seven people dead.

"Explosions, believed to be the work of the rival Fatah group, on Friday evening near Gaza beach killed five senior Hamas members and a child."

There has been no "outbreak" of violence in Gaza that started on the weekend. It's been an ongoing thing which has been happening for several years. Last year, more than 600 Palestinians, a majority in Hamas controlled Gaza, met violent deaths at the hands of other Palestinians, mostly as a result of what people would normally term as "terrorist actions". It's only the news about them that has been suppressed whereas the deaths of Palestinians involved in violent actions against Israeli civilians (which numbered far less than the 600 Palestinians murdered by other Palestinians) were highlighted and often wrongly blamed on Israel.

Today's "news" is only "news" because, for once, it's rated a mention and wasn't kept on the blank pages.
Posted by Wilbur Post at 10:35 pm 1 comment:

Today's Australian nails it on the matter of "those people who are preoccupied with false arguments about moral equivalence in the long-running Middle East conflict." As much as some folks might claim otherwise, there is no moral equivalence between the barbarism of Hizbullah, Hamas and their Syrian and Iranian benefectors.

The declaration of a public holiday to honour the return of Samir Kuntar who murdered an Israeli man in front of his four-year-old daughter, then killed the little girl by smashing her skull with his rifle butt, is a blight on all of humanity.

But there are many bargains made in this part of the Middle East and those bargains made in the past by those in the public arena that gave succor to the thugs will come back to haunt many of the players in this conflict.
Posted by Wilbur Post at 3:37 pm 1 comment: 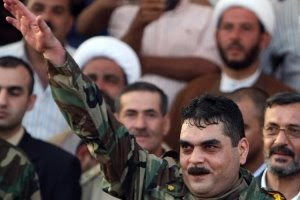 "Lebanon declared a national holiday to mark the return of its prisoners, who will be greeted by Prime Minister Fuad Siniora and President Michel Suleiman in Beirut." - Grief and joy as bodies, men returned home

How tragic and shameful for the Lebanese people that their government, strangled by the barbaric and psycopathic thugs of Hizbullah, could descend to such depraved celebrations for the return to their bosoms of mass-murderers like Kuntar.

This is a black day for the world and for those who made apologies and excuses for Hizbullah in the public domain and in particular those in the media who, in some cases, even went to great lengths to make them seem heroic.

The world now knows the nature of the beast with which the Jewish people have to contend on a daily basis.

PHOTOGRAPH: The pride of Lebanon (from Israellycool)
Posted by Wilbur Post at 10:30 am No comments:

ONE MAN'S HERO IS ANOTHER'S DIRTBAG ...

For those who a sadistic bent who are celebrating the pending release of the terrorist Samir Kuntar, here is the previously unreleased file on this barbarian - The Kuntar File, Exposed - Yediot Aharonot - by Nir Gontarz.
Posted by Wilbur Post at 2:14 pm No comments:

LETTERS OF THE WEEK

Despite false Arab claims of its being a land-grab, Israel has long acknowledged that the fence is a security barrier rather than a political barrier, which, unlike the lives taken by Arab violence, is reversible. While making every reasonable effort to re-route the fence in order to accommodate Palestinian needs, Israel cannot be expected, in the absence of peace, to dismantle a barrier that has saved the lives of so many of its citizens.

The "impenetrable obstacle" to resolution of the Arab-Israeli conflict is not the fence, but the intractable Arab hatred of Israel that made its erection necessary. That hatred remains the real barrier to lasting peace and reconciliation between Israeli and Arab.

THE US has built an enormous wall to separate itself from Mexico. There are no security issues here, none of its citizens are in danger of being blown up by Mexican bombers, no one in Mexico is firing a daily dose of rockets across the border hoping to kill schoolchildren. It is purely an economic thing, to protect jobs.

No one is claiming that the US stole New Mexico, California, Arizona, Colorado, Florida or Texas from Mexico after winning a war that it waged against Mexico. But when Israel builds a wall to protect its citizens from actually being killed, the media and much of the world are enraged. I wonder why.

These letters won't reverse some of the nonsense that is published from time to time in this newspaper about Israel's security barrier that has helped save hundreds if not thousands of lives - most of them Jewish (which perhaps explains why there is very little done to explain the other side in certain parts of the media).
Posted by Wilbur Post at 9:20 am 4 comments:

NOT A SINGLE WORD!

Defamation of Israel and efforts to call the defamers to account have long been news the Times has deemed not fit to print. Its silence on recent developments concerning the al-Dura affair is just the latest iteration of a decades-long Times lie.

Levin echoes many of the complaints previously made in this blog about some of our local news outlets. There has of course, been a substantial improvement since the departure of Ed O'Loughlin from the Fairfax organisation but coverage of the "Pallywood" phenomenon remains thin on the ground in this country.

Unfortunately, the problem is exacerbated by the attitude of some of our own Jewish academics - one recently was quoted as having objected to the use of the term "Pallywood" because it might offend Palestinian sensibilities.

I suppose that the time will come soon when we are forced to stop teaching and studying the Holocaust because it might offend some Germans.
Posted by Wilbur Post at 8:19 am No comments:

Honest Reporting's latest offering Humanizing the Murderer is a look at how the mainstream media has sought "motives" to explain last week's brutal bulldozer attack by a Palestinian from East Jerusalem. It covers the usual pandering to the cause of the Palestinians in which the Jews must be blamed for every imperfection on the other side.

I'm not always in full agreement with Caroline Glick but HR nails it with this quote from her Jerusalem Post article - The media and enduring narrative when she noted that the bulldozer attack was only the second Palestinian attack on Israelis to be preserved on film. The first was the bloody lynching of two IDF reservists in the early days of the Second Intifada in 2000. Glick pointed out that both cases drew apologies from the networks that showed them:

In this case, as in the case of the lynching eight years ago, the reason the BBC apologized is not because the film's images were too gruesome, but because it strayed from the accepted narratives of the Palestinian war against Israel. To maintain the narratives, "the right editorial balance between the demands of accuracy and the potential impact on the program's audience," is one that engenders the belief that Israel is either morally indistinguishable from the Palestinians, or that Israel is morally inferior to the Palestinians.

A SPECIAL PLACE IN HELL

Bradley Burston writes a column in Haaretz entitled a Special Place in Hell. Today, he asks about Palestinian terrorism and whether it is a natural act.

What, exactly, is a decent person supposed to think?

On a quiet and clear morning in Jerusalem, a woman is driving toward the heart of the city, her infant with her in the car. There is nothing to fear.

It is not a military area, it is not a sector of occupation, it is not a settlement - Jews have lived and worked here for more than a century. Jewish doctors and nurses were treating Arab infants, women, the elderly and the infirm here as early as 1902, when Shaare Tzedek Hospital opened across the street.

There is nothing to fear.

Except for the man behind the wheel of a bulldozer, who has taken it upon himself to kill Jews.

I think the question must also be asked of all those apologists for terrorism in the media and elsewhere. What, exactly, is a decent person supposed to think about this or about the deeds of Sami Kuntar the psychotic butcher of innocent civilians who is about to be exchanged for the corpses of Israeli soldiers and some information from Hizbullah about the whereabouts of others taken captive? It's a rhetorical question so the Pilgers, the Fisks and the Loewensteins of this world needn't bother deigning to answer.
Posted by Wilbur Post at 4:57 pm 5 comments: