A ceasefire agreement is supposed to be in place and the cycle of ceasefires continues between Israel and the Palestinians as we wait for the first of the inevitable breaches by one or other of the Palestinian terrorist groups which will most likely go unreported in the west until the inevitable Israeli retaliation.

Meanwhile, there is no ceasefire in nearby Syria where the army and rebels continue their killing sprees unabated, where the number of deaths continues to be far greater than in this conflict and where you are far less likely to see its victims on the front page of your newspaper unless they are falsely attributed as victims of Israeli strikes.

And thanks to this letter writer in the Age, we also know that the killing goes on in Sudan  which coincidentally is one of the sources of Palestine's terror rockets but of course people like Leunig don't stand up for the victims of Sudan's violence. No one, least of all the execrable hypocrite Leunig cares about the Nuba people in South Kordofan.

FOR more than a year, the government of Sudan has been bombing the homes of the Nuba people in South Kordofan, Sudan, forcing thousands to flee to refugee camps in South Sudan. The government of Sudan has also been blocking humanitarian aid to those who have not managed to escape. Intermittent bombing by Sudanese government forces is also ongoing in Blue Nile State, Sudan. I've been told the lack of media attention is because ''no one cares about what happens to Africans''. International media focus may help to shame the Sudanese government into allowing aid access - but what will it take to make the suffering of thousands of people in Sudan front-page news?

Esther Anderson, Surrey Hills
Posted by Wilbur Post at 7:48 am No comments:

LEUNIG COMES FOR THE JEWS

"First They Came for the Jews" by Pastor Niemoller

First they came for the Jews and I did not speak out because I was not a Jew.

Then they came for the Communists and I did not speak out because I was not a Communist.

Then they came for me and there was no one left to speak out for me.

... and when they came for the Jews they did so because they were Jews and not because the Jews had fired a single missile at the German people ... nor did they send suicide bombers into German streets ...  not did they disembowel pregnant German mothers in front of their children.

That is the difference Michael Leunig - and it's what makes you a horrible, disgustingly sick piece of work. 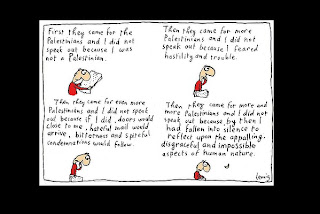 The most vile cartoon published in the Age in years.
Posted by Wilbur Post at 9:42 pm 3 comments:

I've refrained thus far from going into too detailed an analysis of the Age's coverage of the conflict because quite frankly, Pollard and McGeogh aren't really journalists in the sense that we expect them to report on all of the facts in anything that remotely resembles objectivity so it's a waste of time going through their propaganda with a fine tooth comb. We all know exactly what it is.

However, the mind still boggles when I read this sccount from Pollard about Gaza's motorcycle lynch mob: 'spies' executed, corpse dragged through streets.

The impression I get is that the reporter is doing her level best to present the case for these horrendous extrajudicial killings. She's also confused as to where these deaths figure in the obligatory scoreboard at the foot of the article. Naturally, Pollard's scoreboard doesn't reveal the not insignificant number of Palestinians who have died as a result of many of the misfired Hamas and Islamic Jihad rockets which hit the wrong targets.

The truth of course is that the victims of this conflict are all in part victims of a media that gives Hamas succor by dignifying its thuggish, uncivilised behaviour and this article demonstrates the truly ugly side of the Age style of journalism which leaves so much to the blank pages.

Last Thursday, three Israelis were killed when a Hamas rocket slammed into a residential building in the Israeli town of Kiryat Malachi. This is British Labour MP Yasmin Qureshi's susequent tweet repeatiing the tired old claim that Hamas missiles are harmless.

Another hideous liar - and stupid to boot, coming from a British Labour MP!
Posted by Wilbur Post at 10:51 pm No comments:

I managed to catch up with the BBC's Dateline LOndon programme last night and what a farce that was?
The panel was made up of four reporters and a compere who were all of the same mind about the conflict between Israel and Hamas. The Israelis were the villains and Hamas are almost as pure as the driven snow.

One of the reporters, a Sudanese, couldn't help trotting out lie after lie including the doozy about assassinated Hamas monster Jabril being on the verge of agreeing to a "peace" deal with Israel. She clearly comes from the Joseph Goebells School of Journalism and the rest of the panel were no better because none of them challenged her outrageous lies.

Needless to say, the war crimes of the Sudanese government and its decades-long campaign of genocide against its southern minorities was left unmentioned by the journalist/propagandist on the panel.

As an exercise in groupthink and stupidity it rated first class.

Otherwise, it stunk.
Posted by Wilbur Post at 9:29 am No comments:

GUARDIAN LIE Emily Drabble tells an outright lie in Israel's assassination of Israel and Gaza News resources round up. 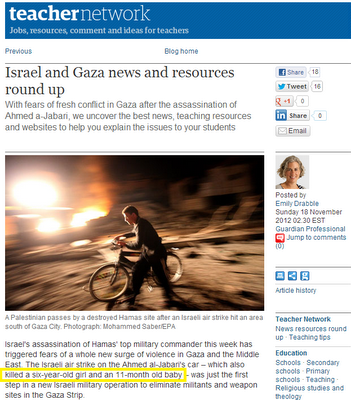 Thanks to elderofziyon we know that she told this lie:-

Israel's assassination of Hamas' top military commander this week has triggered fears of a whole new surge of violence in Gaza and the Middle East. The Israeli air strike on the Ahmed al-Jabari's car – which also killed a six-year-old girl and an 11-month old baby – was just the first step in a new Israeli military operation to eliminate militants and weapon sites in the Gaza Strip.

As reported in the Telegraph - How Israel killed Ahmed Jabari, its toughest enemy in Gaza

Unlike targeted killings in the past, there was no collateral damage except for some minor injuries from flying glass. Israel has learnt the hard way that accidentally killing civilians carries a damaging political cost.

The murder committed was of the truth but that's de rigeur for the Guardian.
Posted by Wilbur Post at 10:16 pm No comments:

This is what it's about - Hamas – godless killers


In firing at Jerusalem, the Islamists underlined that they have no compunction about murdering absolutely anybody

Statement from the Prime Minister


Australia is gravely concerned by escalating conflict in the Middle East.

The Government condemns the repeated rocket and mortar attacks on Israel from the Gaza Strip and calls on Hamas to cease these immediately.

Australia supports Israel's right to defend itself against these indiscriminate attacks. Such attacks on Israel's civilian population are utterly unacceptable.

Further escalations in rocket attacks from Gaza, such as those seen overnight, will not serve the interests of the Palestinian people or their cause for self-determination and statehood.

We urge both Hamas and Israel to exercise restraint and to protect the lives of civilians.

The Government of Australia will work earnestly with other countries to end further attacks from Gaza and to encourage a de-escalation of this conflict. We encourage regional countries, particularly Egypt, to support efforts to restore peace.

The only way forward is a two-state solution based on direct negotiations between Palestinians and Israelis.

Outside the Fog of War

Today's Australian Editorial Gets it Right -

Israel's first duty must be to defend its citizens

HAMAS has only itself to blame for the latest Israeli military strikes in Gaza and the sooner the international community accepts this - rather than indulging in another round of knee-jerk condemnation of the Jewish state as an aggressor - the sooner an element of reality will return to Middle East peace efforts.
Posted by Wilbur Post at 5:23 pm No comments:

Letters get it right

Both from today's Australian:


HAMAS is an organisation founded and rooted in genocidal violence against Jews and Israel. History has demonstrated the futility of attempting to negotiate with such organisations, with military strength being the only language it respects.

The targeted killing of Ahmed al-Jabari will no doubt result in much righteous indignation from Gaza. But it will eventually result in a reduction of rocket attacks and attempted incursions from Hamas. This is the way the world works in the Middle East.
Alan Freedman, St Kilda, Vic

THE patience of Israelis in the face of daily provocation is remarkable but with the US presidential election out of the way and Hamas's supply chain from Syria disrupted, an Israeli response was just a matter of time. Iran's preparedness to defend its nuclear arsenal may also be tested; and the Arab Spring may yet arise in Tehran.
Greg Jones, Kogarah, NSW
Posted by Wilbur Post at 9:46 am No comments:

According to Ruth Pollard in - War fears rise as Israel kills Hamas commander
"ISRAELI ground forces are on standby to enter the Gaza Strip after the Israel Defence Forces said they had hit more than 100 ''targets'' in the besieged coastal territory, an offensive that began with the assassination of Hamas commander Ahmed al-Jabari in a missile strike in Gaza City."

This all began when Israel decided to waste a terrorist with blood on his hands.

Pollard knows nothing of the hundreds of missile and mortar attacks on Israeli civilian targets that preceded this action.

Fool!
Posted by Wilbur Post at 5:00 am No comments:


THEY'RE AT IT AGAIN!
The terrorists at Hamas have instigated a war with Israel with their constant rocket attacks directed at Israeli civilian targets, the latest escalation having begun on 10 November. The rockets threaten the lives of over a million men, women and children but the media slept through these attacks.

Israel's patience finally ran out and it has struck back with the surgical assassination of the leader of Hamas' military wing.

The apologists for terror immediately came out of the woodwork and the Palestinian propaganda campaign against Israel immediately swung into action.

Thanks to Israellycool the first fraud of the war has already been uncovered  - The Tan Jacket Man
Watch his amazing recovery between 2:12 and 2:43!

There are more lies to come.

WHO WOULD TOLERATE THIS? 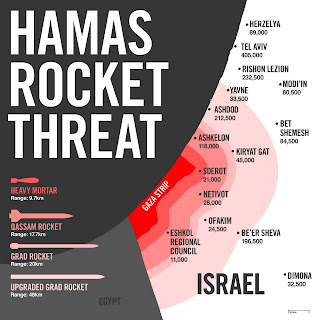 After four days of instensified bombing of large areas of Southern Israel by Hamas, during which time 1,000,000 Israeli citizens came under enemy attack, Israel finally lost patience and targeted Ahmed Jabri, the head of Hamas' military wing, in the Gaza Strip in a pinpoint surgical operation:

Other than Jabri and his driver, there were no casualties. His death will however, bring outrage from the usual sources.

In the next few days, media outlets like the Age which all but completely ignores the plight of Israel's civilians and either ignores or excuses the war crimes of Hamas, will be out in force.

Let them know what a bunch of weasel mothed hypocrites they really are.
Posted by Wilbur Post at 7:12 am No comments: