Something foul this way comes

The inaptly named Australians for Palestine continue on their self-defeating campaign to trash the Palestinian brand -
Stooping to use people who call themselves Jews but support a campaign that is intended to wipe out the Jewish State is as low as you can get.

These people are causing more harm to the Palestinians that to any Israeli.
Posted by Wilbur Post at 8:55 am No comments: 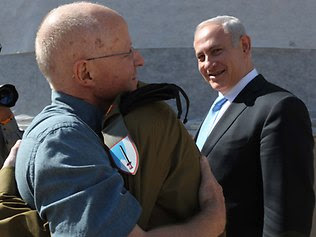 Kidnapped Israeli soldier Gilad Shalit, who was held hostage for more than five years by the democratically elected Palestinian terrorist group Hamas and released in return for more than a thousand prisoners, is welcomed home by his father Noam.

This is the story of the conflict.

Other sons are no doubt being hugged by fathers but they were also swearing to try to commit further violence against their Jewish neighbours. Shalit's message was that he hoped for peace.
Posted by Wilbur Post at 8:12 am 1 comment:

It appears that Hamas has struck a deal with Israel for the release of its soldier Gilad Shalit who was abducted five years ago.

In return for Shalit, an undisclosed number of Palestinians will be set free.

The release of Gilad Shalit is a human rights victory of the highest order.

There will be no celebrations of his release from the fax human rights activists who have been silent these five years while Gilad Shalit was kept in captivity by the evil regime that rules the Palestinian people of Gaza and which denied their prisoner even the most basic of human rights.

There will be no pronouncements by these so called activists about the disproportionality between the value of one Jewish life as against the value of possibly a thousand Palestinians for they are nothing but rank hypocrites.

Still, the most important thing is that Gilad Shalit will soon be free and back with his family and his people.
Posted by Wilbur Post at 7:22 am No comments:

Dershowitz at his best.
Posted by Wilbur Post at 7:17 am No comments:

MALCOLM FRASER AND HIS LOVER AFFAIR WITH HAMAS

Here's that old smoothie Malcolm Fraser who bludgeoned democracy in Australia many years ago, doing the same for the people of the Middle East with his continuing love affair for the genocidal thugs of Hamas - It's now time for the West to recognise Palestinian statehood.

We're not sure whether he kept his pants on while writing this.
Posted by Wilbur Post at 10:35 am 1 comment:

In their own words:

If Israel withdraws from Jerusalem, evacuates the 650,000 settlers, and dismantles the wall – what will become of Israel? It will come to an end.

[...]
Who is nervous, upset, and angry now? Netanyahu, Lieberman, and Obama... All those scumbags. Why even get into this? We should be happy to see Israel upset.

[...]
If we say that we want to wipe Israel out... C'mon, it's too difficult. It's not [acceptable] policy to say so. Don't say these things to the world. Keep it to yourself.

I want the resolutions that everybody agrees upon. I say to the world, to the Quartet, and to America: You promised, and you turned out to be liars.

A QUESTION FOR HUMAN RIGHTS SUPPORTERS

Human rights groups, which could be highlighting the crimes of Arab dictatorships against Israel and each other, have instead chosen to focus primarily on Israel. They continually discount the extraordinary steps Israel takes to protect civilians on both sides — steps approved by military experts, such as using pamphlets, phone calls and even noise bombs to scare people away from a location before a bombing — while whitewashing Hamas’s desire to eliminate a whole country as just bluster and meaningless words. One would think that, of all organizations in the world, human rights groups would particularly believe that words matter. Words inform intent and influence action. Words and actions need to be taken seriously, especially when they are sponsored by governments.

The real obstacle to long-term peace is the endless and overwhelming words of hate and incitement to genocide effectively spread to Arabs and Palestinians. One example is the textbooks given to millions of children in Saudi Arabia, distributed in the Arab world and beyond, that label Jews “monkeys and pigs.” This continues to foment discord, radicalism and violence.

The absence of criticism by the United Nations and human rights groups is more than just a lack of judgment and fairness. It is proof that the Arab Spring has yet to thaw the old thinking that has stymied progress toward peace for far too long. There will be no peace between Israel and the Arabs while hatred and incitement to genocide continue. Sixty years of spewing hate won’t be undone in a day. Human rights groups should be leading this battle — not ignoring it.

Much the same could be said of certain segments of the media which despatch any news of such hatred and incitement directly into their blank pages.
Posted by Wilbur Post at 7:48 am No comments: